Spider-Man: Far From Home is a 2019 film, and the eleventh and last in the Marvel Cinematic Universe's Phase Three. It was produced by Columbia Pictures, Marvel Studios, and Pascal Pictures, and distributed by Sony Pictures Releasing. The film, being a sequel to 2017's Spider-Man: Homecoming, was directed by Jon Watts, from a screenplay written by Chris McKenna & Erik Sommers.

With Peter Parker on summer vacation, he takes his adventures as Spider-Man across Europe, where he must team-up with some unlikely allies to battle the Elementals. 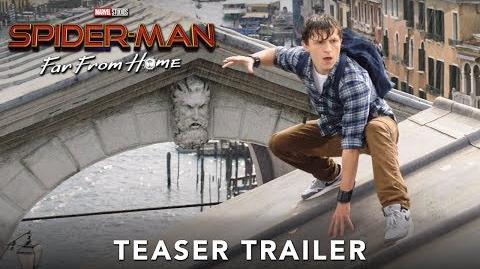 Teaser.
Add a photo to this gallery

Retrieved from "https://marvel-cinematic-universe-guide.fandom.com/wiki/Spider-Man:_Far_From_Home?oldid=21931"
Community content is available under CC-BY-SA unless otherwise noted.